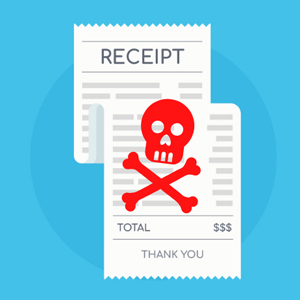 Organizations seek the phase out of BPA and BPS on receipts by 2020 to protect cashiers and customers.

“With every transaction at the cash register, cashiers and customers across Canada are unknowingly exposed to a dose of hormone-disrupting BPA or BPS,” says Muhannad Malas, Toxics Program Manager with Environmental Defence. “Successive federal governments have failed Canadians when it comes to protecting them from toxic chemicals, so Canada’s leading grocers must now pick up the slack to protect workers and customers.”

Canada banned BPA in baby bottles in 2010 after an assessment determined it was toxic under the Canadian Environmental Protection Act (CEPA). But the government chose not to consider workers’ exposure to this toxic substance or its potential replacements. This has meant that BPA continued to be used in receipts and other thermal paper, and where it was removed voluntarily, it was replaced by a closely related bisphenol substance such as BPS, which exhibits comparable effects to BPA.

"Workers need leadership from Canada's largest food retailers on this issue. Protecting the health and safety of thousands of cashiers and other retail workers can't wait for government action," says Derek Johnstone, Special Assistant to the UFCW Canada National President. "Canada's biggest food retail companies have the ability to protect workers and consumers from these hazards now, and they have an obligation to put health and safety first, especially if they are claiming to be socially responsible corporate actors."

Earlier this year, research published by Environmental Defence illustrated that cashiers are being exposed to BPA or BPS at potentially dangerous levels during a regular work shift. The study exposed the vulnerability of retail workers in Canada who are predominantly women and teenagers and are physiologically more susceptible to the reproductive and hormone-mimicking effects of bisphenols.

“The link between BPA exposure, particularly at low doses, and breast cancer cell development and proliferation is one of the most studied issues in the health effects of toxic chemical exposures,” says Jennifer Beeman, Executive Director of Breast Cancer Action Quebec. “The Endocrine Society has been particularly vocal about its serious concerns and considers BPA a public health risk. It is time for companies to act to protect the health of their workers by avoiding this toxic exposure, particularly when the majority of cashiers are women.”

Other countries and jurisdictions have moved to protect workers from bisphenols. Europe has banned BPA in receipts and Switzerland recently extended the ban to BPS. With the Canadian government continuing to drag its feet, leading retailers must step up and use their market power to shift away from bisphenol-covered receipts and adopt readily available safer alternatives.

“There's no reason why shopping at the grocery store should mean families may be exposed to a toxic hazard,” says Mike Schade, Mind the Store Campaign Director. “Just like retailers have driven BPA out of baby bottles, they should take action to remove bisphenols from receipts. Retailers have the power and moral responsibility to mind the store.”

You can take action on this issue signing our joint petition calling on leading grocery giants across Canada to protect workers by ditching toxic receipts. Make your voice heard by signing the petition today!