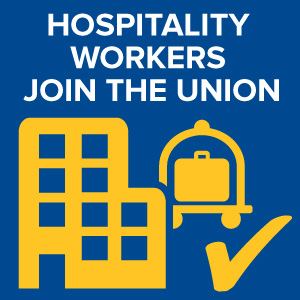 Mississauga, Ont. – February 7, 2020 – Hospitality workers at the Homewood Suites and Hampton Inn hotels in Mississauga, Ontario are the newest members of UFCW Local 1006A after recently saying “Yes!” to joining the union.

“We are proud to welcome the new members at Homewood Suites and Hampton Inn Mississauga,” says UFCW 1006A President Wayne Hanley. “Our hard work means that UFCW 1006A continues to grow in size and strength, while achieving gains for members,” he adds.

The 75 members work in a variety of positions at the hotels, including banquet staff, house persons, room attendants, laundry workers, and shuttle drivers.

Having joined UFCW 1006A, the Homewood Suites and Hampton Inn workers have also achieved a new union contract that runs until January 2023.

The new collective agreement was negotiated by UFCW 1006A Executive Assistant to the President Frank Ragni and Union Representative Joe Blythe.

Highlights of the new contract include a union benefits plan that is 100 percent paid for by the company; time off on the Civic Holiday; and a 15 percent increase to banquet gratuities.

UFCW Local 1006A represents 36,000 members in a wide range of sectors across Ontario, including the grocery retail, food processing, hospitality, laundry, warehousing, transportation, and eye care industries. To learn more about UFCW 1006A, visit their website.