Waste management workers at NexCycle join the union – UFCW 1006A 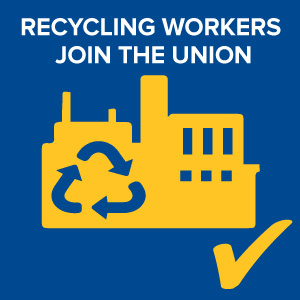 Guelph, Ont. – May 19, 2020 – Waste management workers at NexCycle Industries are the newest members of UFCW Local 1006A after recently voting to join the union.

“On behalf of our Local Union, I’m thrilled to congratulate the new members from NexCycle on their inspiring victory to achieve fairness at their workplace,” says UFCW 1006A President Wayne Hanley. “Now more than ever, workers are realizing the value of having union representation and a voice to advocate for them through challenging times. The COVID-19 pandemic is revealing the vital role that unions play in protecting the health and safety of workers, ensuring proper personal protective equipment is provided, and that fair language is in place,” he adds.

NexCycle provides glass recycling solutions and is based in Guelph, Ontario. Members at the recycling plant work in a variety of roles, including General Labourer, Scale Operator, Quality Tech, Supervisor, Loader Operator, and Heavy Equipment. Key reasons for joining the union included health and safety and wages. 1006A also represents NexCycle workers in Brampton.

“The NexCycle workers remained united throughout this entire process,” says Lesley Prince, Organizing Director for UFCW 1006A. "Although the company would like to exclude the supervisors from this process, the union fully supports their right to join, as they do not have managerial responsibilities such as hiring, firing, or disciplinary actions. We look forward to seeing the NexCycle members negotiate a fair union contract and would like to thank these essential workers for continuing to do their jobs during such uncertain times,” she adds.

Notably, this was the first organizing campaign where UFCW 1006A used electronic union membership cards and filed for certification electronically, and where the Ontario Labour Relations Board conducted electronic voting.  To read more about the innovative union victory at NexCycle, click here.