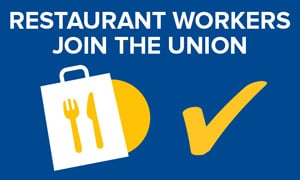 Toronto – September 2, 2020 – Workers at the Tim Hortons Innovation Café in downtown Toronto are the newest members of UFCW Local 102 after recently voting to join the union.

The two-dozen fast food workers joined UFCW to address issues surrounding health and safety, scheduling, discrimination, and favouritism. They also wanted to gain a strong voice in the workplace.

The breakthrough union victory at the Innovation Café makes it the first corporate, non-franchised Tim Hortons ever to be unionized in Canada. In addition, both the organizing campaign and certification vote were completely digital, as all union card signatures were collected electronically and the unionization vote was conducted online, with 100 percent participation from the bargaining unit.

“I would like to congratulate and welcome the new members at Tim Hortons’ Innovation Café, who showed great courage and determination throughout their campaign to join the union,” says UFCW Local 102 President Dominic Musitano. “We look forward to helping these members build a better life by negotiating a fair first contract that addresses their concerns.”

Based in Hamilton, Ontario, UFCW Canada Local 102 represents over 5,000 members working in the hotel, hospitality, service, and restaurant industries, as well as other sectors of the economy.