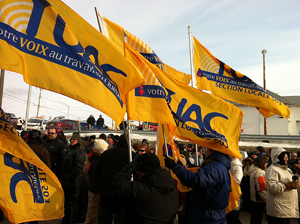 Quebec – April 19, 2013 – UFCW Canada Local 503 is taking action against the Canada Revenue Agency for attempting to claw back $63,402 from the incomes of eight members. The CRA’s unjustified actions are especially shocking since the agency has long recognized the seasonal nature of the seafood industry, where the members work as quality control inspectors for Fruits de mer de l’Est in Matane, Quebec.

The Local 503 members received a notice of debt from Human Resources and Skills Development Canada (HRSDC) at the end of March, which demands – from the employees – amounts varying between $3,345 and $12,983.

“The Harper government’s decision to change its EI policies is one thing, but to retroactively penalize honest workers for claiming benefits in accordance with a customary practice uncontested by CRA for 17 years, is another, and it’s totally unacceptable. The Harper government is going too far,” says Local 503 Treasurer Alain Langlois.

“As the union representing the quality control inspectors at Fruits de mer de l’Est, we do not intend to give-in easily, and we will fight the government on this issue,” adds Brother Langlois. “We will challenge these abusive claims in court, because there is no way that Local 503 members should have to bear the cost of the government’s poor decisions.”

Local 503 represents 10,000 French-speaking UFCW members at more than 200 businesses in the food and retail sectors throughout Quebec and the Maritimes.