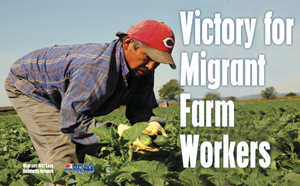 Winnipeg – May 16, 2013 – Canada’s leading voice for agriculture workers, the United Food and Commercial Workers (UFCW Canada), is applauding the Manitoba government in response to its decision to extend public health care coverage to migrant farm workers: the people who make the country’s food supply and production system possible.

For the past several years, UFCW Canada has a led a wide-spread and popular campaign throughout the province, and across the country, dedicated to informing the public about the urgent need to grant provincial healthcare to migrant farm workers.

“We also applaud the Manitoba government for recognizing the essential role that migrant workers play in the province’s economy, and for acknowledging the difficult and dangerous conditions that migrant farm workers endure in producing our food, thereby, making full access to public healthcare all the more essential,” adds Hanley.

Effective this summer, seasonal agricultural workers will become eligible for Manitoba Health coverage while they work in the province, waiving wait times for eligibility which is consistent with the approach used in Saskatchewan. Currently, migrant agriculture workers are required to have health insurance through a private insurer and pay out of pocket for it.

"Seasonal agricultural workers work hard to grow the food that Manitoba families enjoy and as taxpaying residents of Manitoba, they deserve the same public health care that other taxpayers already receive," says Jeff Traeger, president of the UFCW Canada Local 832. "On behalf of these workers, UFCW thanks the Manitoba government for extending provincial health coverage."