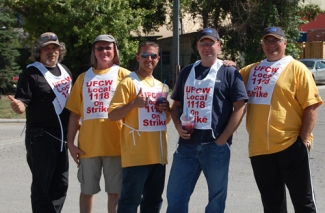 "The union is ready and willing to go back to the table if the company is serious about discussing the terms of a fair and equitable settlement," says Local 1118 President Albert Johnson.

One of the main issues facing the membership is the company's proposal to move 20 per cent of its employees into a defined contribution pension plan rather than a defined benefit plan.

"What’s going on at Canada Malting is another example of how the corporate interest is trying to capitalize on the recent global economic crisis to needlessly claw back the living standard and future stability of working families," says UFCW Canada National President Wayne Hanley.

“Canada Malting needs to pay very close attention to the fact that it’s not just dealing with 69 workers in Calgary,” adds Brother Hanley. “It’s also facing over 1.3 million United Food and Commercial Workers across North America, and we all stand in full support and solidarity with our brothers and sisters on the picket line.”

No further talks have been scheduled.