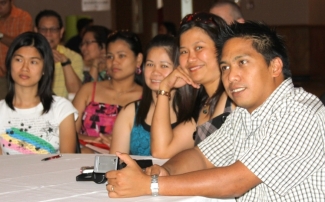 The event was organized by UFCW Canada and the Agriculture Workers Alliance (AWA) “to recognize the essential contribution over 4,000 migrant Filipino workers make to one of Canada’s most important industries,” says UFCW Canada national representative Alex Banaag, who along with Mary and Rene Vidal from the AWA Centre in Leamington helped coordinate the day and had the pleasure of taking part in its festivities.

“Filipino Agriculture Workers Day is also another opportunity to bring together members of the activist community to focus on how we can better collaborate to empower migrant workers and challenge the federal government and the TFWP,” adds Brother Banaag referring to the Temporary Foreign Worker Program, which has drawn wide criticism for its failure to protect workers from abusive employers and unscrupulous contractors.

The exploitative nature of the TFWP has prompted UFCW Canada and the AWA to launch a number of public campaigns, with the most recent campaign dedicated to standing up for Guatemalan farms workers who are forced to accept an outrageous set of conditions before they’re allowed to enter the program (see DIRECTIONS 10.29).

Several social justice organizations in addition to UFCW Canada and the AWA also joined the Filipino Agriculture Workers Day celebration including a large number of activists from Migrante Ontario. Participants also heard from immigration lawyer Rafael Fabregas who talked about his numerous experiences in fighting for workers who are mistreated by the TFWP and its profiteers.

The day also offered refreshments for participants and many light-hearted moments, including a musical performance that involved a fun-filled exchange between Filipino and Mexican vocalists.