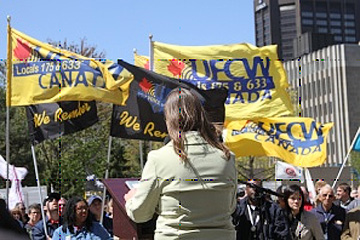 A large group of UFCW Canada members, officers and staff joined hundreds of other activists and civil society organizations across the country on April 28 to remember the fallen and fight for living as part of the National Day of Mourning ceremonies.

The Day of Mourning events, in a number of communities across Canada, served as a memorial and a sober reminder that many Canadian still lose their lives at work every year. In 2008 (the latest statistics available), over 1,000 people in Canada lost their lives while trying to provide for themselves and their families.

Over 100 UFCW Canada activists took part in Toronto’s Day of Mourning Event, which was attended by Mayor David Miller, who praised the crucial role unions play in preventing workplace accidents. The Mayor also introduced Dilshod Marupov, a young new Canadian who was maimed, but miraculously survived, after falling several stories in a tragic Christmas Eve accident that killed several of his coworkers (see DIRECTIONS 10.02).

Bryan Neath, Assistant to National President Wayne Hanley, took the stage at the Toronto event to talk about the deadly

discrimination that still exists in the Canadian agriculture industry.  “We remember all the workers who have died while trying to make the food we feed our families,” said Brother Neath, referencing the fact that for a longtime – before the UFCW Canada Agriculture Workers campaign – farm employees in Ontario were excluded from the province’s Occupational Health and Safety Act.  “We remember them, and wonder how many would still be here if they had the same rights as everyone else. We say ‘shame’, and we say ‘never again!’” said Brother Neath to the large crowd assembled at Nathan Phillips Square, who responded with a roar.

But, the deadly discrimination still continues in Alberta, where agriculture workers remain excluded from the province’s health and safety law – despite the tragic workplace death of farm worker Kevan Chandler, and the recommendations of a public enquiry (see DIRECTIONS 10.14).  From January 2008 to December 2009, 36 people died while working on Alberta farms.

To join the UFCW Canada campaign to stop Alberta’s deadly double-standard and make farms safer for workers, go to www.ufcw.ca/harvestofdeath.