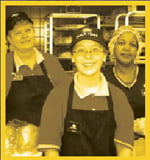 1983 - The Insurance Workers International Union (IWIU) votes to merge with the UFCW.

1983 - UFCW begins its affiliation with the Leukemia & Lymphoma Society.

1983 - After 25 years with predecessor Unions – UPWA and AMCBW – former UFCW Vice President Charles Hayes becomes the first trade unionist ever to be elected to Congress, and serves five terms in the U.S. House of Representatives (Illinois).

1986 - UFCW members at Gainer's meatpackers in Edmonton are forced on strike after the compands demands heavy concessions, sparking the “Battle on 66th Street” and one of the most tumultuous strikes in Canadian history.

1986 - Creation of the UFCW Canada National Defence Fund (NDF), which would eventually become the country’s leading strike and lockout resource.

1987 - Due to UFCW pressure, OSHA expands hazard communication standard to provide information and training to hair care and retail workers.

1993 - International Union of Life Insurance Agents (IULIA) of Ohio, Wisconsin and Minnesota merges with the UFCW.

1993 - RWDSU merges with the UFCW and becomes RWDSU District Council of the UFCW.

1994 - United Garment Workers of America (UGWA) merges with the UFCW.

1995 - Textile Workers of America (UTWA) merges with the UFCW to become UFCW Textile and Garment Council.

1997 - Canadian Union of Restaurant and Related Employees merge with the UFCW.

1998 - Production Service and Sales District Council merges with the UFCW.

1999 - UFCW Canada wins a Supreme Court of Canada decision for unions to communicate freely with the public about their disputes, including workplace locations where there is no union. 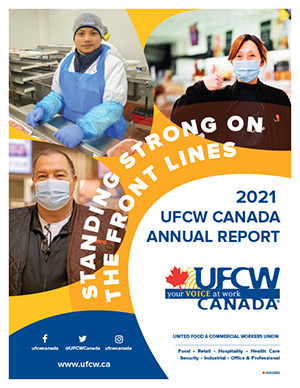