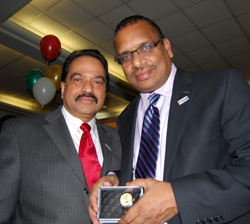 Over 150 UFCW Canada activists, friends and family members recently gathered in Scarborough, Ontario – a community in Toronto – to celebrate the holiday season and to raise over $3,000 for Leukemia and Sickle Cell research. Sickle cell anemia is a congenital blood disorder that affects all races, but is most common to persons with African ancestry, and afflicts approximately 72,000 people worldwide.

The annual dinner and dance was hosted by UFCW Canada Local 1993 and drew a number of members and their families from Locals 175, 633, 1000A, and 1977. The event also involved representatives from the National Office, including UFCW Canada National President Wayne Hanley who took part in an awards presentation that honoured several long-time activists for their lifelong commitments to the union.

Pictured are Lenny Copper and Heeralal “Raj” Rajkumar, whose combined service to the union as member-activists is over 40 years. Brothers Cooper and Rajkumar were presented with commemorative Local 1993 watches for their extraordinary commitment to UFCW Canada as members, officers and activists.

“The annual dinner and dance is an exciting UFCW Canada tradition that provides the union with an excellent opportunity to recognize some outstanding examples of activism while contributing to the researching efforts of two very important causes,” says Local 1993 President Winston Gordon.