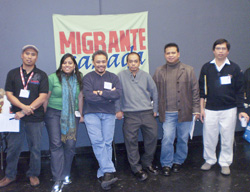 Sixteen Filipino migrant organizations from across Canada gathered to take part in the congress under the call to action, “Advance the struggle for genuine change: Fight for the rights and welfare of Filipino Migrants and their families.”

Delegates and observers from Alberta, British Columbia, Manitoba, the Atlantic Region, Quebec, and Eastern and Western Ontario approved and ratified the constitution andby-laws of Migrante Canada; agreed on a 2-year general plan of action; and united on their position, critiques and recommendations regarding Canada’s Temporary Foreign Workers (TFW) program.

Alex Banaag, UFCW Canada national representative, participated as an observer, delivered a message of solidarity, and participated in the discussions regarding the status of Filipino temporary workers here in Canada. 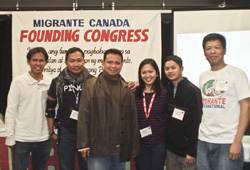 Brother Banaag described how UFCW Canada and the Agriculture Workers Alliance (AWA) are fighting for the rights of every TFW across Canada — including a pathway for permanent residency and citizenship for all workers entering Canada. In addition, as a key community ally, UFCW Canada also provides Migrante Canada members access at no cost to UFCW Canada’s webCampus on-line education program.

“We congratulate Migrante Canada on their founding congress,” said UFCW Canada National President Hanley. “We look forward to continuing our shared commitment and efforts on behalf of temporary foreign workers in Canada. If a person is good enough to work in Canada then they are certainly good enough to stay in Canada, and that union membership and permanent residency are key to solving the crisis that so many face under Canada’s draconian TFW program.”