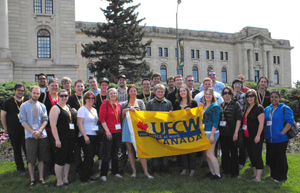 The young worker activists, a number of  them shop stewards and graduates of the UFCW Canada National Youth Internship Program, gathered for two days of workshops, networking, and presentations by a number of guest speakers including Saskatchewan NDP Deputy Leader Deb Higgins; Alex Mortensen, Provincial Councillor, Saskatchewan Young New Democrats (SNYD), as well as Paul Meinema, Executive Assistant to the National President who encouraged the delegates to extend their union activism by getting involved in political action to support labour friendly initiatives and candidates their communities.

The sessions were followed by a more direct political experience with the delegates touring the Saskatchewan legislature, including a question and answer session with NDP MLA and Finance Critic, Trent Wotherspoon.

UFCW Canada Local 1400 President Norm Neault closed the successful conference by thanking the delegates for their activism now — and in the future. "We recognize how important the role young members play in strengthening and building our union. You are the leaders of the future, so we are grateful we can call on you now and tomorrow to be involved."