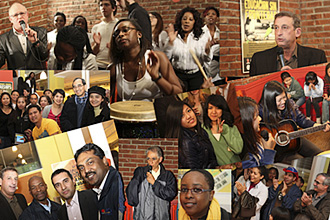 The UFCW Canada Human Rights department’s Education Has No Borders international campaign is this year’s winner of the prestigious Breaking Barriers Award from the Canadian Association of Labour Media (CALM).

Chosen annually by CALM, the Breaking Barriers Award recognizes a communications initiative by a union that enhances member participation and access, and overcomes discrimination.  One of CALM`s judges, Ish Theilheimer, commented that “the Education Has No Borders initiative is one that ‘walks the talk' by making scholarships available to the children of temporary foreign workers.” 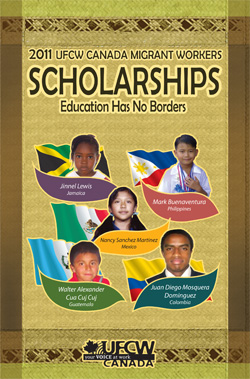 Education Has No Borders was launched nationally by the UFCW Canada Human Rights, Equity and Diversity Department in May 2010 and served as a springboard event to officially launch: the UFCW Canada Migrant Workers Scholarships; national access for social justice allies and migrant workers to UFCW Canada's leading edge, online education and training resource webCampus; the UFCW Canada Academic Support Network;  and Students Against Migrant Exploitation (SAME), among other education-based initiatives for or about migrant workers.

Naveen Mehta, the director of UFCW Canada's Human Rights, Equity and Diversity Department, underscores the importance of such initiatives “as highlighting the empowering effect education has on individuals and communities.”

If we are going to continue to create genuine progressive change that eliminates the exploitation experienced by migrants," says Brother Mehta, "one key tool is to raise public awareness of migration issues, as well as providing additional tools for migrant workers themselves.”

The annual CALM awards recognize excellence in union publications and productions. Entries are judged by independent experts in a variety of categories and classes.