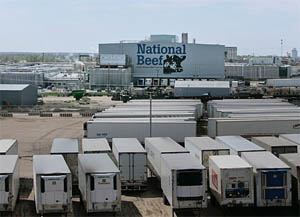 A majority of the 2,500 workers at National Beef’s Dodge City, Kansas, beef slaughter and processing facility voted to join UFCW District Local 2, in an election conducted by the U.S. National Labor Relations Board, on Thursday and Friday, November 3 and 4, 2011.

The workers’ campaign began when several National Beef workers contacted the UFCW seeking a union voice on the job. At that time, National Beef and the UFCW agreed on a fair and balanced process that allowed employees to vote on whether or not they wanted union representation. UFCW represents the workers at a neighboring Cargill beef slaughter and processing plant in Dodge City.

“Helping to organize my co-workers into a union was a life changing journey,” said Rebecca McGary, a worker in the fabrication department at National Beef.

“We know that workers at Cargill, just down the street from National Beef, have had a contract with Local 2 for many years – and that means they have always had a say in their wages, benefits and working conditions,” said Ramon Prieto who works on the kill floor at National Beef and who took a leading role in organizing his co-workers. “That’s why I voted to join the UFCW, so that we all will have a chance to negotiate benefits and salaries, job security, and a better life for our families.”