Local 1000A wins injunction against Loblaws 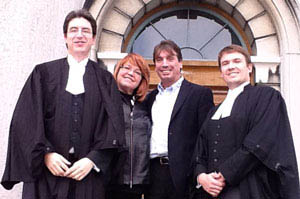 UFCW Canada Local 1000A recently announced that food retail members have won a court injunction to stop Loblaws Supermarkets Ltd.’s inappropriate application of a letter of understanding in the collective agreement.  Letter of Understanding 59 concerns the conversion of a conventional store to a Great Food banner and states if a member does not regularly work a particular time or day at their store, they will not be required to make themselves available for work at that time or day in the Great Food banner if it’s for legitimate reasons and not personal preference.

The court injunction means the company must stop continuing to incorrectly tell members (until the matter is resolved in arbitration) that a second job, child-care issues, etc., are not legitimate reasons and must stop denying them availability exemptions they may be entitled to under Letter of Understanding 59. This decision means the company will have to accept a second job, child-care issues, and etc., as legitimate reasons until the arbitrator makes a decision.

The court injunction is an unprecedented step for the Local Union, but with the well-being of the memberships at stake, the Local 1000A leadership felt it was a necessary battle. Since conversions began earlier this summer, some members were feeling forced to take the buyout and quit because of these constraints on their availability. Members, who were previously denied availability exemptions (other than for religious reasons, dealt with in a separate process), are also entitled to have their requests honoured pending arbitration if their grievances weren’t withdrawn due to insufficient merit under Letter of Understanding 59. Local 1000A is hoping for a decision from the arbitrator in March.

“As the company re-structures, our key priorities have been and continue to be helping our members through this very difficult time and defending their rights under the collective agreement,” says Local 1000A President Pearl Sawyer. “We are pleased with the court’s decision, which will provide relief for many of our members who would have felt forced to quit and take the buy-out or as an example, lose their second job to meet new minimum availability requirements.”

Sawyer also commended members at previous stores for their bravery in fighting the initial battle together with the union for a court injunction. “They are to be truly commended for coming forward and agreeing to tell their personal stories – some of which were very personal and being willing to swear affidavits to their situation,” added Sister Sawyer. “Their stories have helped pave a smoother path for our other part-timers faced with conversion.”

In addition, Local 1000A has filed nearly 60 grievances and have commenced expedited arbitration on matters not related to religious observation. Religious observation denials will become part of an arbitration that commenced earlier this year. Additionally, school exemptions, requested at the time of conversion, have been approved by the company and no one has come forward to indicate otherwise.