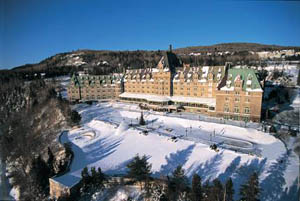 UFCW Canada Local Union 503 recently won a major victory for workers at Fairmont Le Manoir Richelieu in the Charlevoix Region of Quebec, after the Supreme Court of Canada refused to grant the company permission to appeal a provincial court decision that upheld an arbitrator's awarding of unpaid tips to the hotel's unionized staff. The court's refusal marks the end of a long and strenuous legal battle that began in August 2005.

At issue was whether or not the employer violated the Quebec Labour Standards Act by combining service fees and administrative costs into a single 15% gratuity rate that was charged to patrons who used the hotel's banquet services. Section 50 of the Act requires any tip collected by the employer to be remitted in full to the employee who rendered the service and also specifies that "gratuity and tip...do not include any administrative costs added to the bill." The section became law in May 2003, but the Le Manoir Richelieu collective agreement - which was effective from June 15, 2000 to December 31, 2004 - stipulated that part of the 15% gratuity rate had to be given to the hotel's unionized workers. The rate established for 2003 (before Section 50 became law) was 12%, with the remaining 3% allotted to non-union employees. However, the contract also stated "if a public law grants workers more benefits than the collective agreement, those benefits apply."

Following the enactment of Section 50, Le Manoir Richelieu continued to pay the 12% rate to its unionized staff while charging patrons 15% gratuity for banquet services. In light of the Act's requirement that tips collected by the employer have to be paid in full to the employees who rendered the services, the union filed a grievance claiming the full 15% rate. When the grievance reached arbitration, the arbitrator ruled that Le Manoir Richelieu had not provided conclusive evidence outlining the portion of the 15% gratuity that represented administrative costs added to the patron's bill. He therefore ordered the company to pay its unionized workers the full 15% rate for the period between August 2003 and December 2004.

After numerous appeals by Le Manoir Richelieu, the union is elated to know that the arbitrator's decision will stand. "We are happy for our members because this victory ends the latest chapter of a lengthy struggle in the courts," says Steeve Bégin, President of UFCW Canada Local 503.