London Day of Action against Caterpillar scheduled for January 21st 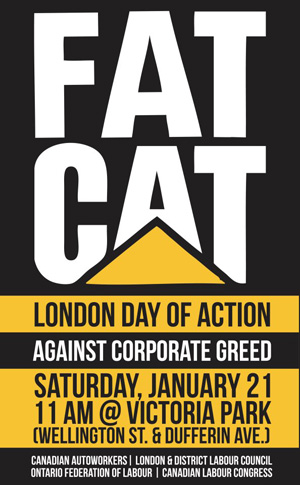 The Ontario Federation of Labour (OFL), the Canadian Auto Workers' (CAW) union, the London and District Labour Council, and the Canadian Labour Congress have issued a call to workers across Ontario to mobilize for a massive rally in London on Saturday, January 21 to oppose Electro-Motive Canada (a subsidiary of U.S.-based Caterpillar Inc.) and its attack on decent paying jobs. The rally will begin at 11 a.m.

Electro-Motive locked out workers at its London, Ontario diesel train plant on New Year’s Day. It was the latest tactic in the company’s attempt to slash benefits and cut wages from $35 to $16.50 an hour, following a year in which Caterpillar enjoyed billion dollar profits and a 20 percent boost to production. The company is rumoured to be planning to take advantage of the province's lax labour laws by bringing in scab labour to keep the plant operating while bullying 465 CAW members into devastating concessions. Many fear that the company will ultimately move production to a plant in Indiana.

“We see this struggle as being central to the entire labour movement and we are going to dig in our heels and fight Caterpillar with everything we’ve got,” says OFL President Sid Ryan. “Good jobs and retirement security are being threatened by greedy corporations and every level of government. If workers don’t fight back, the middle class will be decimated.”

As part of the Day of Action against Caterpillar, the rally will draw attention to the failure of the Harper government to protect Canadian jobs and interests when domestic companies are acquired by foreign multinationals. It will also call on Ontario Premier Dalton McGuinty to support fair collective bargaining by banning the use of scabs in labour disputes.

"This rally is a necessary act of resistance against outrageous corporate greed and government complacency," says UFCW Canada National President Wayne Hanley. "Just three years ago Stephen Harper awarded a $5 million federal tax break to Electro-Motive Canada. Now the company wants to cut workers’ salaries in half and Mr. Harper is nowhere to be found. We cannot allow industrial giants like Caterpillar to destroy middle class jobs while the government stands by and does nothing," adds Brother Hanley. "I encourage the members and officers of UFCW Canada to attend the London Day of Action and take a stand against the greedy corporate bullying of Canadian workers."

For more information, contact Laurie Hardwick at 416-571-3087. If your local is interested in bussing members to the London rally, contact Carrol Anne Sceviour at 416-443-7670 or [email protected].