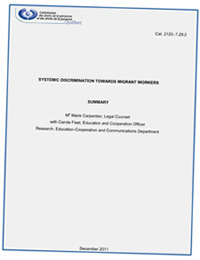 In its report, released on February 20, the CDPDJ points out that migrant workers coming to Quebec under temporary work permits are victims of systematic discrimination based on their ethnic or national origin, race, social condition, language, and in the case of live-in caregivers, their gender. The report focuses on low skilled workers and delivers a scathing critique of the Live-In Caregivers Program, the Seasonal Agricultural Workers Program and the Low Skill Pilot Project. The vulnerability of the workers, says the report, “is induced by a system that facilitates the violation of the fundamental rights and liberties of migrant workers.”  According to the CDPDJ, this vulnerability exerts a downward pressure on the working conditions of all employees in the sectors where migrant workers are employed.

The CDPDJ is urging the Quebec government to set up a permanent immigration program that would provide a pathway to permanent residency for migrant workers in sectors where there is an ongoing need for their labour. Its report also recommends sector-wide work permits; better regulation of recruitment agencies; provision of social protections available to other Quebec residents; and the removal of the contractual obligation for migrant workers to live on the property of the employer.

To further prevent abuse or employer reprisal if a worker voices a concern, the Commission has also recommended there should be an independent tribunal where migrant workers can be heard in cases of repatriation following a decision by the employer, the consulate of the country of origin or the Canadian Border Services Agency.

In collaboration with the Agriculture Workers Alliance, UFCW Canada has made a number of representations to the CDPDJ on behalf of migrant agriculture workers in Quebec. In 2009, the AWA filed a complaint on behalf of all Guatemalan workers that come to Quebec through the Low Skill Pilot Project. The complaint pointed out the that the advantageous treatment  of local workers,  compared to SAWP and Low Skill temporary foreign workers was discriminatory and was based on national or ethnic origin. Shortly after, the CDPDJ initiated an enquiry of its own regarding the rights violations of migrant workers. The report the CDPDJ has now released takes into consideration many of the recommendations that the AWA and UFCW Canada had made for many years.

"We welcome the report's conclusions and recommendations," says Louis Bolduc, executive assistant to the UFCW Canada national president. “The report makes clear the time has come to adjust Quebec legislation so that it fully respects the fundamental human and labour rights of migrant workers in the province."