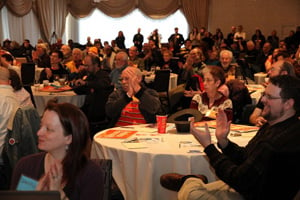 The Ontario NDP Provincial Council overwhelmingly passed a resolution at the party’s recent council meeting in Toronto to support Zellers workers in asking Target for Fairness.

The 200-plus council members gathered at the city’s Sheraton Centre during the last weekend of February to finalize convention plans, participate in committee meetings, and, most importantly, focus on the most pressing issues facing the province’s working families.

The motion to support Zellers workers in asking Target to respect their many years of loyal service, experience and collective bargaining rights, was introduced to the plenary of activists by long-time New Democrat and UFCW Canada national representative Andrew Mackenzie.

A well respected political campaigner and union organizer, Andrew is running to serve the ONDP as president. The current ONDP president Sandra Clifford is retiring after many years of loyal activism, and the new executive will be determined by delegates to the 2012 ONDP convention in Hamilton from April 13 to 15.

After responding to Andrew’s motion with resounding applause, the provincial council members unanimously supported the resolution to stand with Zellers workers in asking Target for fairness, which includes visiting www.targetfairness.ca, Liking the campaign’s Facebook page, and sending a letter to Target CEO Gregg Steinhafel.

To see a photo gallery of the ONDP provincial council meeting, and to find out more about Andrew’s decision to run for ONDP president, visit www.facebook.com/AndrewforONDPpresident.