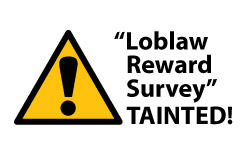 UFCW Canada has been informed that Loblaw is telling workers in several provinces to complete a “Loblaw Reward Survey”.

Loblaw workers need to know that UFCW Canada is very concerned about this survey, and your union feels this survey is tainted and may be used as a tool by the company to undermine your collective agreements, and to cut the benefits you and your coworkers deserve and have rightfully earned.

UFCW Canada believes that Loblaw is using this so-called “reward survey” to solicit information that might be used against you and your coworkers in bargaining as part of an attempt to weaken our ability to maintain and improve wages, benefits, and other things that have a massive impact on your current working environment, standard of living, and plan for the future.

There is strong reason to believe that the company may use the information gathered in this survey to try to create a divide in the membership, and to determine what they can attempt to take away from the hard fought collective agreements that belong to you and your coworkers.

UFCW Canada does not support or endorse this survey and your union believes that it violates the Labour Acts and Codes in most, if not all provinces. We believe the company is interfering in the bargaining process by effectively cutting out your elected representatives from a key conversation about your working conditions.

We have advised Loblaw that their actions are not only unethical, but they are also illegal, and Local Unions across the country are reviewing their options in each province including the probability of pursuing legal action in this matter.

Sadly, we live in a time when more and more of our employers are embracing the questionable tactics of huge transnational corporations who do not reflect our values as Canadians. As workers, we need to be on constant guard against this new reality, and to stay more united than ever to protect the things we have earned as a union and a movement over so many years.

Your union was built by, and is made up of, workers like you. We believe in good and improved wages, benefits, sick days, vacation time, pension and flexible working conditions that meet the needs of you and your family. Going forward we can protect and build on our past achievements by standing together for greater fairness and higher standards that benefit UFCW Canada members and all retail food workers.