OFL organizes Ontario Day of Action against Austerity for April 21 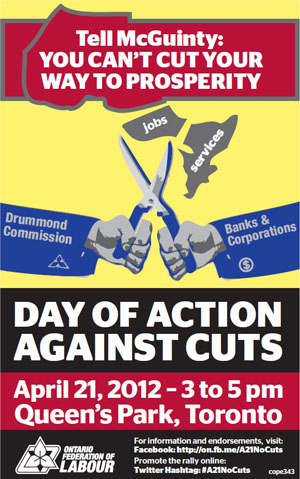 In light of Ontario Premier Dalton McGuinty's plan to use the Don Drummond Commission Report as justification for dismantling the province's valuable social services, the Ontario Federation of Labour (OFL) is calling on all activists to attend the Day of Action against Austerity at Queen's Park in Toronto on April 21 at 3 p.m. The protest will tell Mr. McGuinty to build the province rather than tear it apart.

The Premier enlisted former Bay Street banker Don Drummond to recommend cuts to public sector jobs and services. At a time when Ontarians are in desperate need of government investment, support, and a concrete plan for economic recovery, the proposed cuts will jeopardize every aspect of society - from health care to full-day kindergarten to pensions. Instead of cancelling billions of dollars in corporate tax cuts and using that revenue to create new jobs and pay down debt, the McGuinty Liberals have chosen to balance Ontario's books by putting more people out of work and destroying the province's social safety net. Tens of thousands of struggling Ontario families need help to get back on their feet, but the government has decided to worsen our economic situation by favouring tax cuts over social programs.

Ontarians cannot idly stand by while the McGuinty Liberals actively undermine our collective future with their reckless slash-and-burn agenda. It's time for citizens to stand up and tell the government that it cannot cut its way to economic prosperity. The OFL is working with community groups and organizations across the province to mobilize workers, retirees, students, and activists to join a mass rally at Queen's Park and demand "prosperity, NOT austerity!"

UFCW Canada urges local unions to mobilize their members, families, and communities to attend the April 21 rally and force the McGuinty government to abandon its cuts to jobs and services.