Taking stock of Walmart: Bullish to workers is bearish to investors 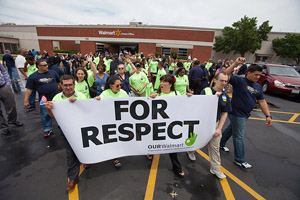 This week Walmart is going to put on quite a show in Toronto. At their annual international meeting for the investment community, Walmart executives will likely paint a rosy picture regarding their international operations. This meeting of investors and stock analysts is, after all, designed so the company can assure the audience that its operations are solid and their investments are safe.

However, there is one reality of Walmart’s business that the company will likely not mention – the fact that the company continues to lower standards for workers around the globe and weaken labour relations in each country where it expands.

Canadians will need no reminding of Walmart's global reach. In some 28 countries, with global revenue of $447 billion, it dwarfs Canada's biggest domestic retailer by a factor of fourteen. And, as the world’s largest private employer (only the Chinese People’s Liberation Army and the U.S. Department of Defense employ more people), the standard Walmart is setting for jobs affects us all.

In our own country, Walmart has ignored workers’ rights. When employees at the Walmart in Jonquiere, Quebec chose in 2004 to be represented by the United Food and Commercial Workers (UFCW) Canada, the company shut down the store.

The same happened in 2000 in the United States. When meat cutters in a Texas store voted to form a union, Walmart replaced fresh meat in all its Texas stores with prepackaged options, rendering the election moot and those who exercised their right to act collectively unemployed.

Similar reports related to Walmart’s opposition to workers can be heard all over the world. In countries like Chile, Brazil and Argentina where Walmart management has been forced to accept a union because workers at the retailers they acquired already had representation, the company works to weaken contracts and sometimes to ultimately undermine the unions. In fact, in January 2012, the largest pension fund in the Netherlands, Algemeen Burgerlijk Pensioenfonds (ABP) divested from Walmart and “black listed” the company because a multi-year investigation and dialogue with Walmart executives revealed ongoing poor labour practices and an anti-union position.

This behavior is sordid, but in the end, why should the investors and stock analysts who are hearing from Walmart this week care? Ultimately, the argument might go, Walmart is just running a smart business. Keeping workers from collectively bargaining is just keeping labour costs (and ultimately prices to customers) low, right?

Actually, no. This aggressive and backward philosophical opposition to workers’ rights coming from Walmart’s corporate headquarters in Bentonville, Arkansas in the U.S.A. is actually hurting the company’s operation and stock price. Walmart’s revenue and profit growth have been weak and the company’s stock has significantly underperformed the S&P Retail Index over the last decade.

Walmart’s price advantage isn’t what it used to be, and its single-minded fixation on lowering costs has left it with unappealing, often chaotic stores, where customers search in vain for out of stock items. To make up for these lost sales, Walmart management has sought to increase revenues by opening new stores; hence, the aggressive drive to break into new countries and new markets.

But its global track record of denying workers a voice is catching up with it. In South Africa, the South African retail workers’ union was joined by a coalition of international labour unions and the South African government to oppose Walmart’s entry into the country. In the end, the process of review and conditions put on Walmart cost the company nearly a year of business and potentially hundreds of millions of dollars. More importantly, South Africans have already experienced the fleeting nature of Walmart’s “commitment” to local suppliers and other stakeholders.

We can see the pattern repeating itself in India, where Walmart has become a lightning rod for groups opposed to foreign direct investment in multibrand retail in the country. Recently, Walmart was the focus of a two day protest warning against further opening up the Indian market. Walmart’s reputation is preceding it in all these potential markets. The countries where it wants to grow are not welcoming its style of American capitalism.

In the end, denying workers the right to organize for better working conditions isn’t just bad for the employees and the communities in which they live. It is bad for business, which is why global investors should take a hard look at the underside of Walmart’s business strategies this week.

As published in the Hamilton Spectator