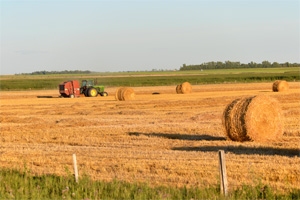 UFCW Canada is urging members, officers, and activists to support two vitally important campaigns aimed at protecting Canadian farmers and the food that we eat. In launching a legal challenge against the federal government's abolishment of the Canadian Wheat Board's single desk, and by lobbying to ensure that the new Canadian and European free trade deal does not prevent farmers from saving, reusing, and selling their seeds, the National Farmers Union (NFU) is working with consumers and coalition partners to stop the Harper Conservatives' erosion of our food system.

In late 2011 the federal government ignored the democratic decision of prairie farmers and a federal court ruling by dismantling the Canadian Wheat Board's single desk and firing its farmer-elected directors. However, the Friends of the Canadian Wheat Board and the NFU have fought back by launching a legal challenge against the federal government. "This is not just about the loss of the Wheat Board, this is a fight for democracy," says NFU Vice President of Policy Colleen Ross.

The NFU is also raising awareness about the Comprehensive Economic and Trade Agreement (CETA) between Canada and the European Union. If CETA is implemented, Canada's public bodies will be prohibited from promoting significant purchasing from domestic suppliers, which means "buy local" food programs will be outlawed.

"We are asking UFCW Canada members, officers, and activists to get involved with these crucial NFU campaigns," says UFCW Canada National President Wayne Hanley. "Both of our unions are involved in the agricultural sector and we understand the importance of protecting farmers and our food system from unrestrained corporate greed and dangerous free trade deals."

The Canadian Wheat Board and CETA campaigns are part of the NFU's broader effort to cultivate a Food Sovereignty movement that allows farmers and consumers to determine their own food and farming system for the benefit of people, not corporations.

To find out more about the two campaigns, and how you can get involved, please visit www.nfu.ca.