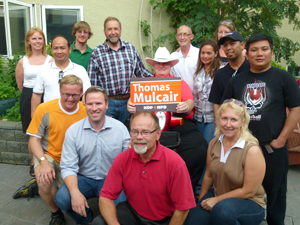 Members and staff of UFCW Canada Locals 401 and 1118 joined NDP members and political activists from across Alberta to welcome Federal NDP Leader Thomas Mulcair to Calgary on July 12th. Over 200 people came out to meet the new leader at a Calgary Stampede barbeque hosted by Alberta NDP MLA David Eggen, who represents the provincial riding of Edmonton-Calder.

Just one day earlier, NDP House Leader Nathan Cullen addressed a packed room of 150 NDP members in an information session aimed at uniting people in preparation for a potential by-election in Calgary-Centre.

Both events drew impressive turnouts and the party is gaining support within Alberta and at the national level. For example, in the last federal election the NDP garnered a higher percentage of votes in the province, and the provincial NDP doubled their seats and increased their popular vote in Alberta's recent provincial election.

As the largest private sector union in the country, UFCW Canada and it members have taken a leading role in becoming politically active with the NDP to ensure that the voices of working families are represented at all levels of government.

“We have seen membership involvement with the NDP increase dramatically over the last number of years,” says Local 401 President Douglas O’Halloran. "In fact we had 37 union members become members of the provincial NDP at our last committee meeting."

Support for the NDP is gaining momentum due to their popular policies regarding retirement security, environmental protection, affordable housing, and developing Alberta's oil sands in a sustainable way. Many of these issues speak directly to the concerns voiced by union members, as well as the general public.

“As union members become more politically engaged in their local constituencies and join their voices with those who have the power to enact government policies, members have a better chance of bringing about the changes that they want to see in Canadian politics,” says UFCW Canada National President Wayne Hanley. "The NDP's growing membership is a very encouraging development. It's clear that working families are fed up with the Harper Conservatives and they want a government that actually represents their interests."