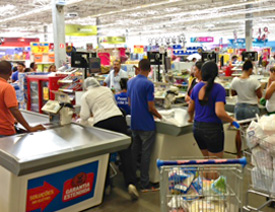 Toronto – August 18, 2014 – Canada’s leading union for retail workers is renewing calls for global solidarity with Walmart workers, in light of the recent announcement that the Brazilian government is suing Walmart for labour rights abuses. Walmart is being sued for US $55 million by the Public Attorney’s Office in the Brazilian state of Alagoas over health and safety violations, harassment of workers, forcing employees to work overtime, and not allowing meal breaks.

The Public Attorney’s Office in Alagoas received complaints from workers that Walmart disciplines employees in front of other staff, that workers are punished without investigation when their cash does not balance, and that labour laws governing overtime and break periods are not respected. In addition to access to fire extinguishers being blocked, the Public Attorney’s Office is also expressing serious concern about Walmart’s failure to protect the physical safety of its employees. For example, workers are often required to transport money through stores without adequate training to protect themselves.

This is not the first time Walmart has been sued for violating workers’ rights in Brazil. Since 2013, the Public Attorney’s Office has sued Walmart for a total of US$72 million for violations, including the illegal termination of employees who suffered workplace injuries or expressed support for their union. In one case, the Labour Tribunal in the city of João Pessoa ordered Walmart to reinstate a worker who had been illegally fired following a fall at work which resulted in a back injury.

“Around the world, Walmart workers share similar concerns about the company’s flagrant abuse of labour rights, health and safety violations, and anti-union behaviour,” says Paul Meinema, UFCW Canada National President, “As Canada’s union for Walmart workers, UFCW Canada will continue to support and advocate for Walmart associates at home and around the world and we salute workers in Brazil for successfully pressuring their government to hold Walmart accountable for their actions.”