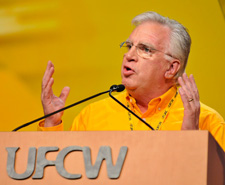 “At the UFCW, we are a family. When tragedy strikes one of us, it is felt by all of us.

Our sister Lesley McSpadden, a member of UFCW Local 88, is dealing with the loss of her son Michael Brown in Ferguson, Missouri.

We have watched the events unfolding in Ferguson – from Michael Brown’s death, to the police response that has targeted peaceful protestors and journalists for exercising their first amendment rights. This entire episode highlights systemic problems that still plague our nation – like abject poverty, the lack of good jobs, and an absence of racial diversity in the halls of power.

We need to address these challenges head on – and labour has a role to play by offering workers the opportunity for a better life. In the meantime, we stand in solidarity with our sister Lesley McSpadden and join her calls for a fair investigation and justice under the law."