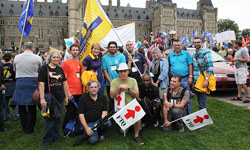 Ottawa – September 8, 2014— More than 6,000 people gathered at the University of Ottawa from August 21 to 24 to take part in the first-ever pan-Canadian Peoples’ Social Forum (PSF). The event attracted members of many different social movements from across the country. Its main goal was to create a synergy between various struggles to build broader strategic alliances against the neoliberal and neoconservative policies that threaten social justice, democracy, the environment, and the rights of Canadians.

A delegation from UFCW Québec and UFCW Local 501 was present and active during the four days of the PSF, especially during the Peoples’ Unity March on Thursday, August 21. At close to 40 percent, the number of union participants was the highest ever recorded at a Social Forum.

Maxime Sabourin, President of the UFCW Québec Youth Committee, said: “The forum wasn’t an end goal but the start of a convergence of the struggles to confront the provincial neoliberal attacks and federal neo-conservatism. The workshop on renewing union and student practices highlighted the UFCW as being on the cutting edge of renewal and we stood out as innovators in suggesting that a Youth Summit be held. This idea was applauded by all and will be put into action in the coming months.”

Alain Lachaîne, President of UFCW Local 501 andSecretary-Treasurer of the UFCW Québec Provincial Council, said: “It was so motivating to see all of these people from different communities across Quebec and Canada coming together to mobilize and face up to the major issues of today, especially the federal election in 2015. I really liked the Forum formula, which was designed to explore many different ideas in workshops. Now the communities have to get organized and create strategies to follow up on all of that."