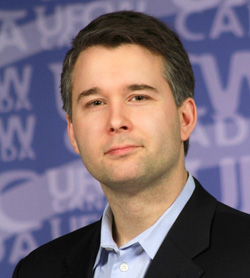 Toronto – September 27, 2014 – The Ontario Minister of Labour recently named UFCW Canada activist, and the union’s regional director for Ontario, Derek Johnstone to the province’s Prevention Council, an advisory body that is mandated by the government to assist the province in reducing workplace deaths and injuries.

The Prevention Council is a multi-stakeholder agency that was established in 2010 after five workers were killed or badly injured on Christmas Eve after the scaffold they were standing on collapsed, plunging them 13 stories to the base of a Toronto apartment building.

“UFCW Canada’s appointment to the Prevention Council further recognizes the union as a leading force and advocate for many of today’s most vulnerable worker communities, including youth, agriculture, new Canadians, and temporary foreign workers,” says UFCW Canada National President Paul Meinema. “We congratulate Brother Johnstone on his appointment, and look forward to supporting him in helping the Prevention Council to achieve its vital mandate.”