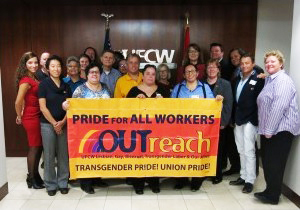 "The OUTreach executive board mapped out goals and actions for 2015 and plans to continue taking part in international Pride festivities," said Emmanuelle Lopez, National Representative of HRED, whom is also a OUTreach executive board member. "We also continue to remain strong advocates for the passing of Bill C-279, which will give more rights to those in the transgendered community."

A major announcement that was made at the meeting was that UFCW Canada has obtained full membership status from ILGA (International Lesbian, Gay, Bisexual, Trans and Intersex Association), an international organization that brings together more than 750 LGBT and intersex groups from around the world.

Created in August of 2013, the OUTreach executive board meets three times a year to focus on the relationships between the labour and LGBTQ communities, fighting for LGBTQ workers' rights in the workplace, and learning more about LGBTQ issues.