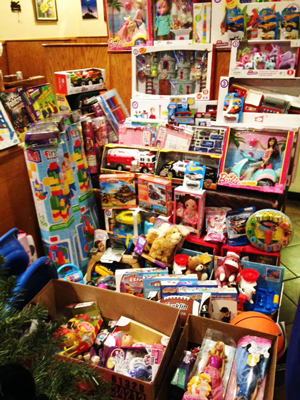 Ottawa – December 20, 2014 – Children at Ottawa-area emergency shelters received hundreds of toys thanks to the efforts of UFCW Canada Local 1000A stewards and activists in the region.

Organized by the Ottawa Division, the Local 1000A Ottawa Toy Drive is now in its fifth year.

“There are so many families in shelters and the holidays are so hard on them,” said Caroline Brisebois, vice president of Local 1000A's Loblaws/RCSS/GFS – Ottawa Sector. “The need is great. There are a lot of kids in the shelters with nothing."

That’s why UFCW Local 1000A activists were was so pleased that 2014 was the most successful year yet for the toy drive.  "At the shelters, kids appreciate a bit of kindness and it brings happiness to the the parents too,” said Sister Brisebois.

The toys were handed out to children from local shelters at an annual Christmas party presented by a local charity which helps Ottawa-area families in need at the shelters. Toys were also distributed to children at the shelters who were not able to attend the party.