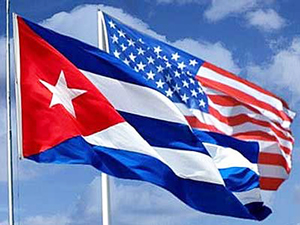 Toronto – December 22, 2014 – Last week’s historic announcement that the United States has agreed to renew full diplomatic relations with Cuba was welcome news for the Cuban people and for UFCW Canada activists and allies who have stood in solidarity with Cuba’s labour movement.

The announcement was also accompanied by the U.S. release of the remaining members of the Cuban 5, ending 14 years of imprisonment for crimes they did not commit. For more than a decade, UFCW Canada and allies, including the Workers Central Union of Cuba (CTC), had joined their voices in an international campaign to free the Cuban 5.

For many years, UFCW Canada has also worked closely with the CTC and Cuban unions in sharing expertise and training on best practices in collective bargaining, conflict resolution, and membership servicing. This past June, UFCW Canada was honoured with the 75th Anniversary Seal of the CTC, in recognition of our support for the Cuban labour movement.

“Throughout the years, UFCW Canada has proudly stood in solidarity with the CTC and all Cuban people in the call for justice for the Cuban 5, and for the restoration of full diplomatic relations with the United States,” says UFCW Canada National President Paul Meinema.

“The courage and spirit of the Cuban people have never wavered over the decades. Their struggle has been an inspiration to all those who cherish equality, worker solidarity, and co-operative progress. As a new era begins in Cuba, we share in their celebration, and commitment to social justice.”