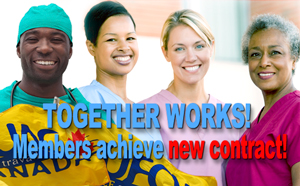 "I would like to congratulate the Jardins du Campanile members on obtaining their first union contract, and thank the bargaining committee and Union Representative Sébastien Ricard for a job well done," says UFCW Canada Local 1991P President Mario Maisonneuve. "Our union will proudly stand by the Jardins du Campanile members, and we are committed to providing them with excellent representation in the workplace," Brother Maisonneuve adds.