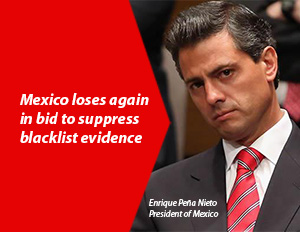 Vancouver – February 14, 2015 – Mexico’s anti-union activities in Canada have gained international headlines, after a ruling by a BC court upheld a labour board ruling that pointed to the Mexican government blacklisting Mexican migrant workers from returning to Canada because they were suspected of being UFCW Canada union sympathizers.

The court ruling was reported by more than 200 international media points across Europe, and North and South America — including Reuters, Yahoo, the Globe and Mail, and the international edition of The Economist. Millions more media consumers were also reached through Twitter and Facebook postings.

“The message to Mexico is that it can’t hide the truth from the courts, or the world, about its violation of labour rights in Canada,” says UFCW Canada National President Paul Meinema. “The world is watching, and so are the Canadian courts. Labour rights are human rights for every worker in Canada, no matter where they come from.”

The international coverage was triggered by a BC Court of Appeal decision on January 30th, which upheld a lower court ruling to allow the BC Labour Relations Board  to rule on testimony from former Mexico consular officials, along with leaked documents that overwhelmingly pointed to blacklisting. Ultimately, the BCLRB determined that Mexico had altered documents in an attempt to cover up its union-busting activities at a BC agriculture operation  where workers had formed a UFCW Canada Local 1518 bargaining unit (see www.ufcw.ca/blacklist).

The workers are employed at Sidhu and Sons Nursery in Mission, BC, where a UFCW Canada Local 1518 collective agreement is in place.