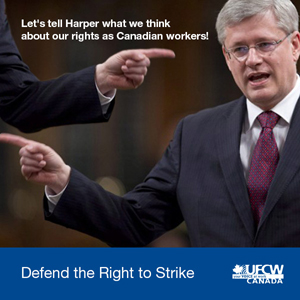 Toronto – February 19, 2015 – Another UFCW Canada online campaign has gone viral, with more than 10,000 activists reached, sharing, liking, and sending a message to Stephen Harper to support the principle that workers have the right to strike — in Canada, and around the world.

The It Is Our Right to Strike campaign was launched in the days leading up to The Global Day of Action for the Right to Strike – February 18, calling on all governments, including Canada, to support the principle that the right to strike is a fundamental human and labour right. And the campaign isn’t over yet.

At a meeting next month, the International Labour Organization (ILO) will consider a proposal to refer whether the right to strike is enshrined within ILO Convention 87 to the International Court of Justice (ICJ). Our union believes this is the proper course of action.

Defend the right to strike. Send a message to Stephen Harper to support the proposal that would refer this matter to the ICJ, and to use Canada’s influence to convince other countries to also vote in favour of the proposal.