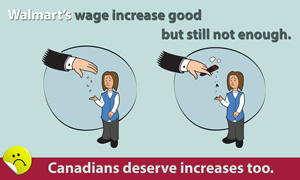 Toronto – February 26, 2015 – Walmart’s recent announcement that over half a million of its U.S. workers will get raises, but without the guarantee of hours, is a move that falls short of the needs of workers and their families, and will have no impact here in Canada.

Under growing pressure generated by community allies, labour groups, and particularly by OUR Walmart – an organization of Walmart workers dedicated to improving their working conditions – Walmart was pushed to publicly commit to raising wages for its U.S. workers.

Walmart announced that it was raising its company-wide minimum wage in its U.S. stores to at least $9 an hour immediately, and to $10 an hour in 2016.

But while Walmart's announcement shows the campaign to push it is working, the company still has far to go. The company can afford to pay all of its workers at least $15 per hour and provide access to full-time, consistent hours. Walmart makes between $16 and $17 billion a year in profits, and the four family heirs to the Walmart empire have a combined fortune that is estimated to be nearly $150 billion. The Walton’s net worth is greater than the wealth held by 42 per cent of American families combined.

The company has not made any promises to increase hours available to workers, and while some of their associates may be receiving a raise, they could potentially see their hours cut to pay for the raises. The company still has yet to make a real commitment to ending its silencing of workers who have been trying to improve the company and their families' lives. Walmart still has yet to reinstate those workers who have been fired for sticking up for their rights.

The announcement will have virtually no impact here in Canada, as Walmart Canada has made no intention to follow its American counterpart's lead.