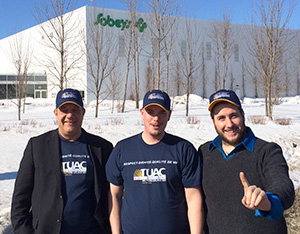 Trois-Rivières, Que. – March 12, 2015 – Workers at the Sobeys distribution warehouse in Trois-Rivières have become the newest members of UFCW Local 501. An application for certification was filed with the Commission des relations du travail (‘‘Quebec’s labour relations board’’) on March 9, after an overwhelming majority of the workers indicated their support for UFCW Canada representation.

“We are very pleased and proud to welcome the new members to our union,” says UFCW Canada Local 501 President Alain Lachaîne. “We are grateful for the trust they have placed in us, and we look forward to representing the new members at Sobeys in Trois-Rivières with our fullest commitment and energy.”

About 130 members work at the distribution warehouse located in the Mauricie region. “By joining Local 501, and Quebec’s leading union, the new members share their strength with more than 45,000 other UFCW Canada members in Quebec,” says Brother Lachaîne, “including members at other Sobeys locations in Terrebonne, Boucherville, Quebec City, and Montreal.”

Once the certification is issued by the Commission, negotiations will commence on a collective agreement.