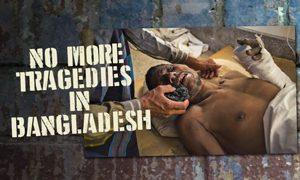 Mongla, Bangladesh – March 12, 2015 – At least five workers were killed, and another 100 were trapped after a concrete factory collapsed in Bangladesh on Thursday.

Officials at the site in Mongla, say about 150 workers were inside the building when it collapsed.

This latest tragedy follows the collapse of a Bangladesh garment factory in April 2013, when more than 1,100 workers were killed when a building they worked in at Rana Plaza collapsed.

Following the Rana Plaza tragedy, many retailers, including Loblaw Companies, committed to signing the Bangladesh Accord for Fire and Building Safety, which uses independent, third-party inspectors in order to improve conditions for workers in the developing nation. More than 1,000 factories have been inspected under The Accord since it was formed. By signing onto the Accord, retailers commit to putting people before profits at their supplier factories. Other companies, including Walmart and Target have refused to sign The Accord.

"This latest tragedy reminds us that we need to support every effort to ensure safe working conditions and building standards, in Bangladesh and globally,” says UFCW Canada National President Paul Meinema. "Independent building inspections are key. Governments, including Bangladesh, must also recognize the rights of workers and their unions to verify the safety protocols, to ensure that worker safety is the number one priority.”