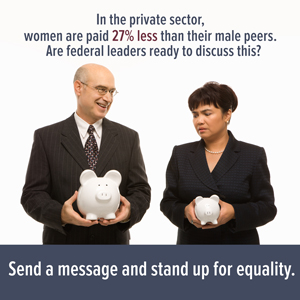 Toronto – April 7, 2015 – A new report reveals the impact that income and gender inequality have in enforcing poverty, citing that the government can use surplus finances to fight poverty and wage inequality.

The report from the Canadian Centre for Policy Alternatives (CCPA) states that “poverty and income inequality are distinct yet related phenomena,” and that reducing poverty is a matter of urgency, however, inequality shapes our view of that urgency.

"There are no excuses that the cupboard is bare for the fight against poverty. Instead, this government is using the surplus to provide tax cuts that will exacerbate income inequality," the report states.

The full report, Alternative Federal Budget 2015: Delivering the Good, describes how the Canadian gender pay gap is the eighth largest among OECD countries. Women’s median employment incomes are 34% lower than men’s incomes. Women are also over-represented among low-wage earners – making up 59% of all minimum wage workers in Canada.

UFCW Canada, the National Council Women's Advisory Committee, and community allies have endorsed Up for Debate – a national campaign to raise awareness about women's rights in the lead up to the 2015 federal election. Up for Debate calls on all political parties to commit to a federal leaders' debate on issues identified by women, including income inequality, and to make meaningful commitments to change women's lives for the better, at home and abroad.