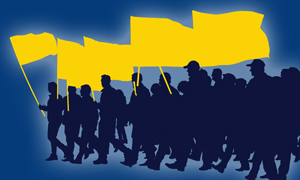 Ottawa – May 23, 2015 – A new Canadian Centre for Policy Alternatives study reveals that union membership can be a key factor to building middle class stability.

According to the new study, union representation dramatically affects workers' ability to move up the middle-class latter. The study, The Union Card: A Ticket Into Middle Class Stability, explores where unionized workers stand along the income spectrum in Canada, and finds that especially during recessionary periods, unionized workers are buffered from hard times and more likely to experience upward mobility.

The study, which looked at union membership between 1997 and 2011, found that workers who joined a union during the 2008 recession saw their incomes jump by an average of 39%.

"Workers represented by a union tend to move a rung or two up the income ladder," says economist Hugh Mackenzie, who co-authored the study with statistician Richard Shillington. "They're not only better positioned to weather economic storms — they're more likely to experience the Canadian middle class dream: upward income mobility."

The full report can be read here. Joining a union is the best way to achieve fairness at work and social justice in society.