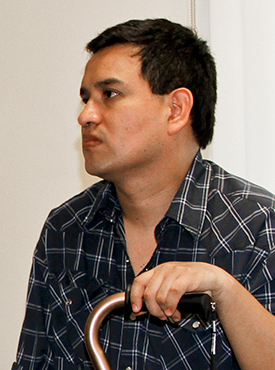 Toronto – July 6, 2015 – Juan Ariza, a migrant worker and survivor of a two-vehicle collision in Hampstead, Ontario that claimed the lives of 11 other men in 2012, has with the support of UFCW Canada, finally gained the provisional right to permanent residency in Canada.

Ariza was one of 13 migrant workers riding in van near Hampstead, Ontario, when it collided with a truck on February 6, 2012. Ten of the workers were killed, as was the driver of the truck.  In the wake of the “Hampstead Tragedy”, UFCW Canada led the call for a coroner’s inquest, and enhanced regulations for transporting workers. UFCW Canada and allies also raised $225,000 for the three survivors and the families of the victims of the tragedy.

Juan Ariza was one of just three men who survived the crash. He sustained massive injuries — some of which are permanent. While he recuperated in Canada in the months following the crash, and eventually received rehabilitation coverage through the Workers Safety and Insurance Board, Juan eventually returned to Peru and his family, while awaiting an answer to his applications for permanent residence in Canada under humanitarian and compassionate grounds. Earlier this year, Juan returned to Canada to obtain intensive rehabilitation, and to continue with his pursuit of gaining permanent residence.

In May, Mr. Ariza got good news from Citizenship and Immigration Canada: the right to permanent residence in Canada, provided he can pass the required interviews and medical tests required by the program.  Mr. Ariza also received confirmation from the WSIB that the board would also cover the costs associated with a visit from his wife and son from Peru.

“Many migrant workers who are injured in Canada, who are covered by WSIB and are then expected to return to meaningful employment in their home countries, are often given an unrealistic determination that they are fit for work,” says UFCW Canada National President Paul Meinema. “UFCW Canada congratulates Mr. Ariza for gaining a significant step forward in his hard fought right to stay in Canada, and to continue his rehabilitation.”

UFCW Canada joined other organizations in advocating for Juan Ariza’s right to stay in Canada and be granted permanent residence. Mr. Ariza has forged important ties to Canada since the Hampstead crash and is working diligently towards the path of suitable employment, such as a service agent, cashier or teller.