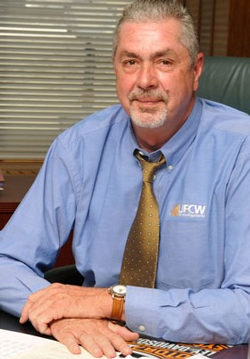 Washington, D.C. – July 21, 2015 – UFCW International President Marc Perrone has been featured as a guest columnist in the Washington Blade, one of the most influential publications for members of the LGBTQ community in the United States. President Perrone's op-ed praises the U.S. Supreme Court's decision to uphold the right of all Americans to marry who they love regardless of sex, and also discusses the need to continue fighting for workplace protections for LGBTQ workers.

"UFCW has long supported legislation that would prohibit discrimination against LGBTQ workers. Since our political leaders won't act, our union is determined to protect LGBTQ workers on the job," Perrone states in the article.

The column goes on to explain that, despite the Supreme Court's encouraging ruling on same sex marriage, workers can still be fired for being gay or transgender in 29 American states. As a result, UFCW is fighting for non-discrimination clauses in collective agreements to guarantee basic workplace rights to LGBTQ members.

"By bargaining strong union contracts, union members can ensure that LGBTQ workers have the right to use family leave to care for a partner; the right to have their health benefits apply to their partners and families; and the right to use the bathroom of their choice," the UFCW leader says.

President Perrone's column is the latest highlight in UFCW's ongoing activism for LGBTQ rights and equality across North America. Recently, former UFCW International President Joe Hansen was presented with the inaugural Bill Olwell Champion of Equality Award for his longstanding commitment to UFCW members in the LGBTQ community.