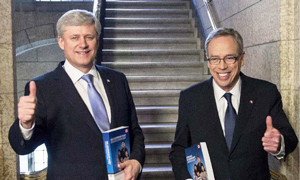 Ottawa – July 23, 2015 – Isn't it appalling that Stephen Harper, who claims to be a trained economist, will not admit that the Canadian economy is currently in a recession?

For a prime minister who bills himself as a "good economic manager," Harper's fiscal record is abysmal at best. Job creation is weak, as there are 200,000 more Canadians who are out of a job now than there were before the last recession in 2008. The Conservatives said their corporate tax cuts would encourage companies to invest in their employees, but instead corporations are sitting on billions in unused cash.

When confronted with the question of whether or not Canada is in a recession, Finance Minister Joe Oliver denies the possibility and says "we are staying the course." But TD, the Bank of America, and a number of Canadian economists all agree that we are in a recession.

The Harper Government's denial is an absolute insult to the intelligence of voters, and Canadians deserve better. Stephen Harper and his Conservative government must be defeated this October and replaced by a government that is ready to create good jobs and strengthen the economy by investing in health care, retirement security, and child care.

After ten years of Conservative Party rule, we need a new government that will move Canada in the right direction. UFCW Canada members see through the Harper Conservatives' manipulative ways and we are ready for change in Ottawa.

On October 19, we will get out and vote to make our voices heard. It's time to elect a government that will properly manage the economy by investing in workers and their families.