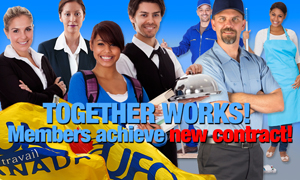 As part of the new contract, the seniors home workers will see many improvements to their working conditions, such as the addition of two floating holidays and one more sick day. The members will also receive new personal leave days for family births, adoptions, and deaths.

In addition, the Pavillon Marie-Reine-des-Coeurs members will enjoy the following gains:

"I would like to congratulate the Pavillon Marie-Reine-des-Coeurs members on achieving their first union contract, and also thank the bargaining committee for their excellent work during negotiations," says UFCW Canada Local 1991P President Mario Maisonneuve. "We are very proud of this agreement, and we want the members to know that we will continue to provide them with effective representation going forward," Brother Maisonneuve adds.