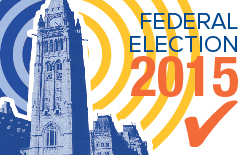 Toronto – September 5, 2015 – Nine UFCW activists from British Columbia, Alberta, Ontario and Quebec will be on the ballot this October 19, as candidates in the federal election. All nine are running as NDP candidates in a campaign where the latest polls are predicting the NDP will form the next government.

In Alberta, UFCW Canada Local 401 staff representative Saba Mossagizi is the NDP candidate in the riding of Grande Prairie–Mackenzie.

“This is the largest contingent of UFCW activists ever to run as candidates in a federal election,” says UFCW Canada National President Paul Meinema. “We are proud of them, and all UFCW Canada activists working to replace the Harper government with a new government and leadership that believes in fairness and opportunity for all Canadians.”