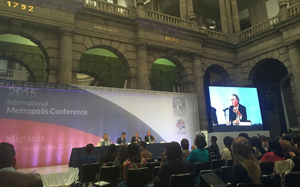 Staff members from UFCW Canada's liaison office in Mexico had the opportunity to discuss Canada's Temporary Foreign Worker Program (TFWP) with conference participants from Mexico, Canada, and the United States during a workshop entitled "The international labour division and precariousness of temporary foreign workers: The case of Canada-Mexico." The workshop panel identified inadequate training and protection for migrant workers as major weaknesses of the TFWP, and discussed the program's lack of visibility among Canadians.

The conference also served as an important opportunity to develop our union's network of community, labour, and academic allies in order strengthen our efforts to achieve justice for migrant and agriculture workers.

As Canada's leading and most progressive union, UFCW Canada works in association with the Agriculture Workers Alliance (AWA) to operate numerous agriculture worker support centres that provide essential support and services to thousands of migrant and agriculture workers across Canada. To learn more about the AWA, visit their website.