By the Numbers: Education is a right and shouldn’t be a burden

Ottawa – September 23, 2015 – The average tuition and other fees for Canadian undergraduates have tripled between the academic years 1993/94 and 2015/16, ranging from an increase of 35% in Newfoundland and Labrador to 248% in Ontario – according to a recent report released by the Canadian Centre for Policy Alternatives (CCPA).

Tuition fees rose in all but one province, Newfoundland and Labrador, where tuition fees for undergraduate and graduate students have been frozen since 2003/2004.

This year, Newfoundland and Labrador, where tuition fees are already the lowest in Canada, was the first province to entirely replace provincial loans with needs-based grants.

Since 2012, Ontario has provided students a 30% tuition bursary rebate, to a maximum of $1,830 annually, for undergraduates whose parents make $160,000 or less each year. (The rebate doesn’t apply to students who have been out of high school for more than five years and those who are attending school part-time.)

Newfoundland and Labrador will maintain its position over the next four years as the most affordable province on both the median and low-income Cost of Learning Index because of its tuition freeze and its shift to needs-based grants.

For low-income families, Saskatchewan is the least affordable; followed by Ontario and Nova Scotia (all three provinces have an in-province bursary). 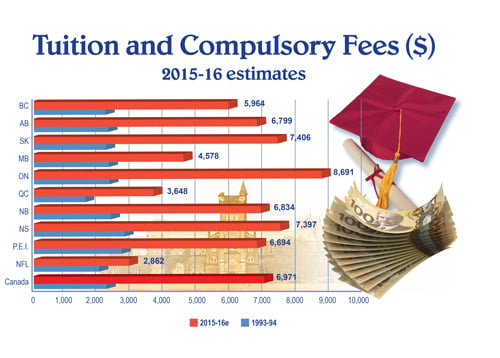