Up for Debate campaign changes gears 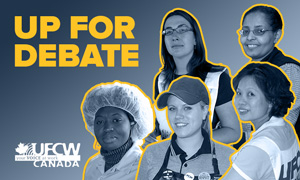 Toronto – September 24, 2015 – Up for Debate, the UFCW-supported campaign to make women's rights and gender equality key issues in the 2015 Federal Election campaign, is shifting gears with a new social media campaign, petition, and a number of events lined up between now and Election Day.

For the last several months, the Up for Debate campaign has been actively working with the major political parties to host a nationally televised leaders’ debate on women’s issues. With your support, the campaign came close to making the debate a reality, as over 500,000 participants supported the concept through petitions.

However, in late August the campaign received confirmation that some of the major political parties would not participate in the debate that was originally envisioned. But this is not the end of the road. The issues that we as activists care about can and will be a major part of this federal election, and with your continued support we can keep the momentum going.

On Twitter, you can help that happen by clicking here to tweet the following message: "Leaders must put #women at the centre of #elxn42! #womenmatter #upfordebate"

And you can also demand that the issues that women and girls care about be #UpForDebate in the 2015 Federal Election by doing the following:

1. SEND A MESSAGE to all of the party leaders by signing the Up for Debate petition here.

2. ASK YOUR LOCAL CANDIDATES how they see their party addressing women's issues in this election. You can download the Up for Debate question guide to help you get started.

3. GET ACTIVE ON SOCIAL MEDIA by downloading the Up for Debate wild postings and posting your support on Twitter and Facebook. Don’t forget to include UFCW Canada in your tweets (@ufcwcanada).

Together, we can fight women's economic inequality, end violence against women, and support women's leadership and organization by challenging our political leaders to address women's rights and gender equality issues in this election.