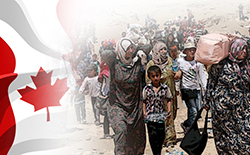 Toronto – October 8, 2015 – UFCW Canada members and allies can now donate directly to a Syrian Refugee Support Fund, established by UFCW Canada and other affiliates of the Canadian Labour Congress, in collaboration with the Canadian Council for Refugees.

There more than 4 million Syrians now displaced by the humanitarian crisis, with more than 400,000 Syrian refugees urgently in need of worldwide re-settlement over the next twelve months. UFCW Canada has joined with other CLC affiliates in donating to the new fund to help support with the settlement of Syrian refugees sponsored to come to Canada.

Individuals can also directly donate online to the Syrian Refugee Support Fund, and will receive a charitable tax receipt.

The Syrian Refugee Support Fund is being administered by the Canadian Council for Refugees, and funds will be distributed to its member agencies with expertise in settling refugees. Over the past decade, UFCW Canada has worked with the CCR on a number of refugee initiatives.