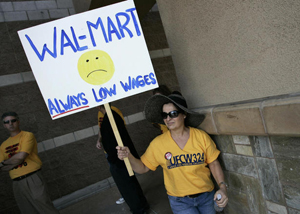 A new class action lawsuit alleges that Walmart Stores Inc. and its staffing agencies broke minimum wage and overtime laws in the United States by requiring temporary workers to appear early for work, stay late to complete work, work through lunches and breaks and participate in trainings without compensation.

The suit was filed on October 22 in U.S. District Court, Northern District of Illinois, Eastern Division.

Labor Ready and QPS, two of the staffing agencies Walmart uses in the Chicago area, failed to provide workers assigned to Walmart stores with information related to their employment, such as employment notices and proper wage payment notices as required by Illinois law.

Walmart itself failed to keep accurate records of workers’ time as required by federal and state law and has failed to provide workers with forms verifying hours worked. This made it impossible for workers to make claims that they were not paid by the temp agencies for all hours worked.

Walmart and its staffing agencies also failed to pay the plaintiffs and others in similar situations a minimum of four hours pay on days when they were contracted to work, but not utilized for a minimum of four hours, as required by Illinois law. This prevented the workers from seeking other work. "I only get paid minimum wage and yet Labor Ready and Walmart still try to cheat me by not paying me for the time I actually work," said Twanda Burk, the primary plaintiff on the lawsuit. "I've proven that I'm a good worker, and they just want to take advantage of that."

This latest class action follows other legal actions against the corporation, including the Duke’s case, a gender discrimination suit that was largest class action suit in American history.

To find out more about the law suit, visit Making Change at Walmart.